Home > Tips & Tricks > Five Things to Avoid in a Thank You Letter.

Five Things to Avoid in a Thank You Letter. 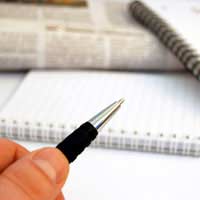 You want to write a thank you letter because you want to say thank you; admittedly that may seem a pretty pointless truism – but there is a reason behind stating the obvious. If you’re going to go to all the trouble of putting pen to paper (or fingers to your keyboard) it goes without saying that you want to make sure that your gratitude comes across loud and clear. The problem is, sometimes what we want to say can get a bit lost along the way – so here’s a quick guide to five of the things to avoid in a thank you letter. Side-step these ‘message muddlers’ and no one will be in any doubt about how you feel.

1. Complaints by the Backdoor

We often want to thank people for helping us sort out a problem or dispute. Under these circumstances, it’s important to remember the real reason for writing, and don’t let a thank you letter end up turning into a bit of a backdoor complaint. There’s nothing to be gained by trotting out your grievances again – however justified they may be – at this stage; remember, you are saying ‘thank you’, after all. Besides, you never know when you might be grateful for their help again, so keep them on your side and leave them with a lasting impression of you as a kind and courteous individual – not a bit of a moaner!

It can sometimes be appropriate to mention these hiccups, but do try to stay clear of a full-on grumble.

See what I mean? Play nicely with the ‘Ms Joneses’ of the world; they’re the ones who get things fixed!

We’ve all heard “it’s the thought that counts” – and of course that’s very true – but when it comes to thank you letters, it’s always a good idea to make sure you don’t get important things wrong. Check that you’ve got someone’s name right, and you know how to spell it correctly (if you can – though it’s not always possible), make sure of their title, job description or department, and be careful with the street address and post code.

Some of the details don’t really matter, but others obviously do. It would be a very ungrateful person indeed, for example, who took offence at a thank you letter addressed to ‘Carol’, rather than ‘Carole’, but confusing the boy’s version of a name with the girl’s – ‘Leslie’ rather than ‘Lesley’, for instance – does makes a difference. Also, particularly in big companies, the wrong department or office number may mean neither Carole nor Leslie will ever get to see your well-chosen words of thanks – so it’s worth taking the time to make sure.

We’ve all heard those ghastly Oscar-winners’ speeches when some movie star or other rattles on interminably thanking everyone from their co-star to their pet cat for making it all possible. Excruciating as they are to listen to, they illustrate a very important point about saying thank you; once you start naming names, it’s hard to know when, or where, to stop.

It’s not a problem when you’re writing to thank an individual, but when more than one person, and possibly a whole team of people, were involved it can soon get quite complicated. Mentioning just one or two and you might risk upsetting the rest, especially if they feel their contribution hasn’t been appreciated – which obviously was never your intention, but people can be sensitive about these things, never-the-less. Under such circumstances, unless someone has gone out of their way to do something extra and particularly deserving of special recognition, the best thing to do is keep your thanks general and don’t be divisive – however much you have your particular ‘favourites’ on the team.

Poor use of language is clearly something to be avoided. Agreed, a thank you letter isn’t an English exam, but you still want to be understood. Bear in mind that your written thanks may be shown around to a lot of colleagues, friends and family – and it may even end up being pinned on a notice board for the whole world to see, so it’s definitely worth making sure that your words are well chosen, and your sentiments make sense. It’s not just about spelling and grammar (though they do always make an impression on the reader, be that a positive or a negative one!); it’s about being clear and accurate in what you say, and – perhaps most importantly of all – avoiding any howlers.It’s also worth remembering that a thank you letter doesn’t have to sound like a legal document. Even if you’re writing to the most important person you can think of, don’t feel you have to take on all sorts of airs and graces and try to come out with lots of long words and complicated sentences. Simple and straightforward is always best.

5. Going On Too Long

Thank you letters shouldn’t consist of a hastily scribbled line or two. They do need to look as if a little thought and effort has gone into them, but that doesn’t mean that they have to rival the entire works of Shakespeare for length. It’s not always easy knowing when ‘long enough’ becomes ‘too long’, but as a general guide, if you remember the acronym KISS (Keep It Short and Simple), you won’t go far wrong.

That leaves just one final thing to avoid – and that’s forgetting the stamp. Lovely though it is to get a thank you letter, having to trudge down to the sorting office and pay the additional postage fees is the quickest way to take the shine off it for anyone!